The Fang people used masks in their secret societies. Members of this male society wore the Ngil masks during the initiation of new members and the persecution of wrongdoers. Masqueraders, clad in raffia costumes and attended by helpers, would materialize in the village after dark, illuminated by flickering torchlight.

The Fang tribe are spread over a vast area along the Atlantic coast line of equatorial Africa and can be found in Cameroon equatorial Guinea and Gabon namely along the bank of the Ogowe river. 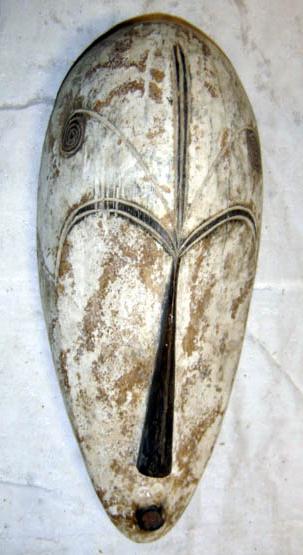 Masks, such as those worn by itinerant troubadours and for hunting and punishing sorcerers, are painted white with facial features outlined in black. Typical are large elongated masks covered with kaolin and featuring a face that was usually heart-shaped with a long fine nose. Apparently it have been linked with the dead, since white is their color. The Ngontang dance society also used white masks, sometimes in the form of a four-sided helmet shape with bulging forehead and eyebrows in heart-shaped arcs. The bieri, gave rise to remarkable wooden sculpture. The bieri, or ancestor figure, would be consulted when the village was to change location, or when a new crop was planted, during a palaver, or before going hunting, fishing, or to war. But once separated from the reliquary chest, the sculpted object would lose its sacred value and could be destroyed.

The ritual consisted of prayers, libations, and sacrifices offered to the ancestor, whose scull would be rubbed with powder and paint each time. With its large head, long body, and short extremities, the Fang bieri had the proportion of a newborn, thus emphasizing the group's continuity with its ancestor and with the three classes of the society: the "not-yet-born", the living, and the dead. The relics were essentially skull fragments, or sometimes complete skulls, jawbones, teeth and small bones. The bieri also served for therapeutic rituals and, above all, for the initiation of young males during the great so festival.

The So, or red antelope, was connected with initiation that lasted several months, the masks used during this ritual had long horns. Passport masks, were attached to arms of the maskers.

This great rain forest region in the Fang territory is a plateau of middle altitude, with innumerable waters with falls and rapids rendering navigation for the most part impossible, and with a climate typically equatorial.

History: They are principally hunters but also agriculturists. Their social structure is based on a clan, a group of individuals with a common ancestor. The ensemble of Fang peoples practice a cult devoted to ancestor lineages, the bieri, whose aim is to both protect themselves from the deceased and to recruit and aid in matters of daily life. This familial cult does not monopolize the Fang's religious universe, for it coexists with other beliefs and rituals of a more collective character.