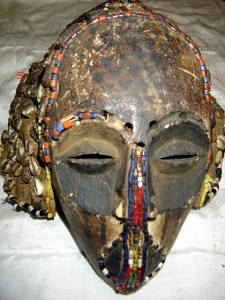 Three types of masks are associated with the Kuba royal kingdom namely the Bwoom wooden mask, Ngaady A Mwaash and the Mwaash aMbooy. Typical characteristics of these masks are the geometrical patterns on the forehead in this instance, colorful beads and the cowry shells. Ngaady a Mwaash or pawn woman of Mwaash: (see image to your left). The mask represents the daughter of the great God Woot. The first wife of the first king from which, all Kuba royalty descended. The two vertical lines below the eyes running down the cheeks represent tears of joy and pain associated with being the queen mother. Material used; wood, beads, cowrie shells fabric and natural dyes. 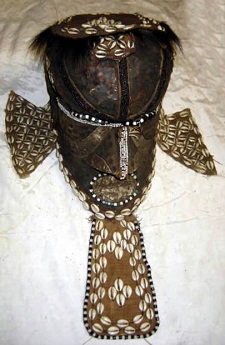 Bwoom - wooden helmet mask. (See image to the left). Typical of these masks are the bulging forehead, big nose and large ears (commonly associated with pygmies). Other features include, metal work on the forehead, cheeks and nose, beadwork along the eyes nose and mouth. The cowrie shells along with the beads on the ear and chin flaps indicate wealth and royal status. According to legend Bwoom was sent to Earth by his father (the great God - Woot), to establish the Kuba kingdom and rule over the inhabitants. His sister Ngaady aMwaash, and his brother Mwaash aMbooy with whom he eventually struggled for power accompanied him. Bwoom also symbolically speaks for the common man.

Mwaash aMbooy - The moshambwooy mask represents - Woot, the first of the royal ruling Bushoong founder of the Kuba kingdom. Each Kuba king and chief owns a Moshambwooy mask and wears it during royal ceremonies and initiation rites. The masks are decorated with colorful beads, cowrie shells, and animal skins to indicate the high rank and royal status. When the ruling king dies, the mask gets buried along with the king.

All three masks described above are worn with costumes that cover the entire body and comprises of fabric, cowry shells, beadwork, feathers and or raffia. During masking ceremonies the mask wearer is possessed by a spirit.