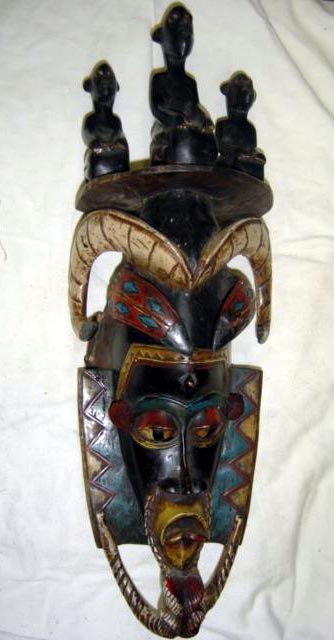 Guro mask represents the spirit of Gu, the wife of Zamble a supernatural being. Gu is often depicted as elegant, graceful, serene and beautiful. Important characteristics of note found in Guro art are; A skillful combination of human and animal forms. Notable features on masks, are almond shaped eyes, rounded foreheads, finely sculptured nose and mouth with small but sprouting lips. Hairdos and headdress are delicately sculptured and elaborate. The masks are normally colorful and coated with natural dyes.

Headdress or delicately carved hairstyles, indicate that the being represented in its art form, do not carry heavy objects on its head this in African tradition indicates wealth and prosperity. Sacred guro masks, delicately crafted and colorful are used and honored during sacrificial gatherings, funerals, and celebrations. They honor protective spirits called "zuzu" and these spirits were housed in shrines.

The Guro tribe was originally known as the "Kweni", but during 1906 - 1912 they were brutally colonized by invading French colonials. The dominant Baule people of the region subsequently named them the Guro tribe. The Guro peoples are governed and regulated by a council of elders, and each main family has representation on the council.