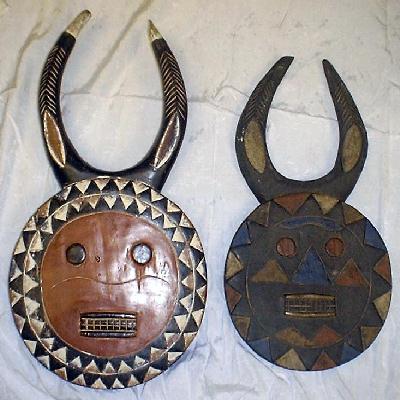 Common features of the Kplekple disc shaped facemasks include antelope shaped horns, round eyes, rectangular shaped mouth and the geometric designs. The red face is considered female and the dark/black face is considered male. The Goli masquerading tradition is performed during funerals and or during times of danger. The mask wearer mediates with supernatural forces during the ritual, which have a positive influence on the village people.

The Kplekple is considered the lowest of Goli masquerades and these rituals appears 3 times during the day. (Dawn, afternoon and after sunset. The dance announcers the arrival of Goli Glin a zoomorphic figure or of kpwan, an anthropomorphic one.

The Baule tribe adopted this ritual from the neighboring Wan tribe, even the language of the Wan is still use during the ritual. The young mask wearers are often draped in goatskin that covers their back along with a raffia skirt. The mask is attached to the costume with vegetable fibers.