The descendants of those who lived more than 20000 years ago in what is now South Africa and who are believed to be the original human inhabitants of sub-Saharan Africa is known as the San Tribe. Some of these hunter-gatherers still survive in small numbers in the Kalahari Desert. Their physical appearance is small in stature; they are brown in color and have unique "click" languages.

These were a Stone Age people. They did not use metals, their weapons were made of wood, stone and bones. They did not domesticate animals, and did not cultivate crops. No pottery was made; instead they used ostrich egg-shells for storing and holding liquids.

They were nomads because they were always on the move in search of game and plant foods. The San did not build permanent settlements they preferred using rock shelters as temporary live sites (see image on left) and or open camps; probably weather conditions dictated the choice of sites. The San existed in small family groups of about 12 - 30 people. A chief controlled their resources on behalf of the group. Back in the day before the arrival of the settlers the San lived in peace along the coast, crayfish, mussels, perlemoen and seals were basic foods, and the large number of fish bones found in the coastal caves inhabited by the San indicate that they were accomplished fishermen. Slivers of bone and wood sharpened at each end were used to hook fish, which were also caught by means of tidal traps made with walls constructed from stacked stones.

The San men were responsible for hunting and fishing and when away on long hunting trips they would gather Hoodia Gordonii and chew the bitter miracle plant to suppress the appetite for 24 hours. (This plant has recently been translated into a miracle obesity cure, P57, with a market potential of US$6 billion and have taken the western world by storm). The women did most of the gathering of plant foodstuffs. These included wild fruits and berries, as well as the leaves, stems, bulbs, corns and roots of a variety of plants.

For thousands of years the lifestyle of the San hunter-gatherers remained undisturbed. However, about 2000 years ago there began a gradual but far-reaching revolution in the economic and social systems of some of the groups in the northern part of what is now known as Botswana, namely the acquisition of and rearing of livestock.

It is thought that these hunter-gatherers acquired their sheep from Sudanese people from the north, and cattle from Bantu-speakers to the east. The fat-tailed sheep that were acquired by the Khiokhoi were in fact known in the Middle East about 4000 years before, when Semitic-speaking people tended them.

The idea of individual ownership, a concept in marked contrast to the tradition of the San that all the resources of the territory - water, animals and plants - were for the people of the community. This gave rise to a degree of conflict between the two tribes.

The Khoikhoi came to perceive themselves as superior to those who did not own domestic stock. Ownership of livestock led to the evolvement of a social hierarchy in which the status of a person was determined by wealth in cattle and sheep.

Finally the conflict between the San and the Khoikhoi had far reaching effects on both cultures This led to some of the San leaving the area to continue the hunter-gathering existence further toward the mountainous and desert areas whilst others joined the Khoikhoi society as hunters and herders, some even acquired their own stock and married Khoikhoi women to form one community namely the Khoisan tribe. Back to Hoodia start page 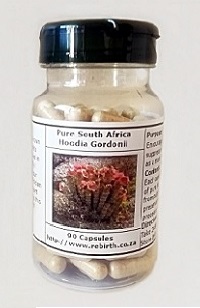